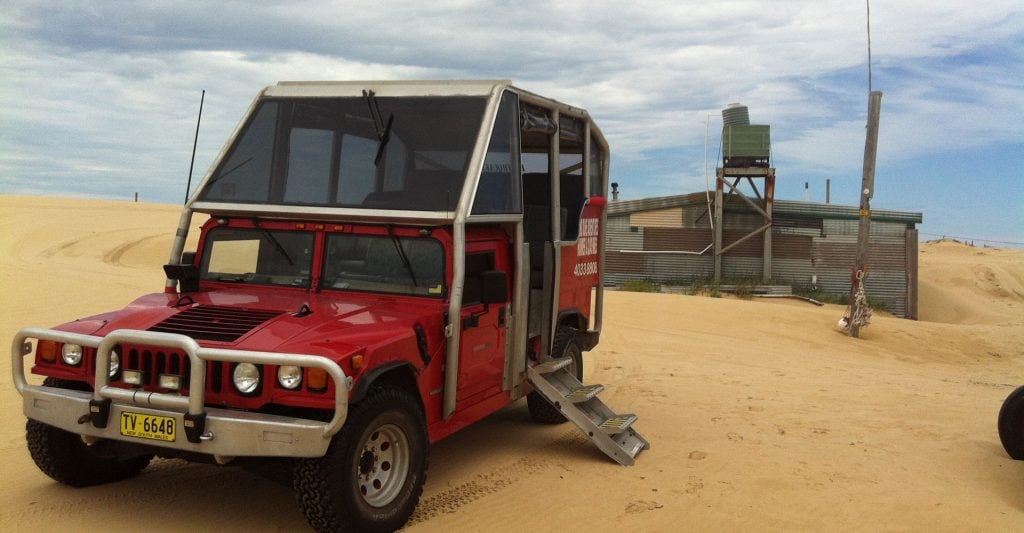 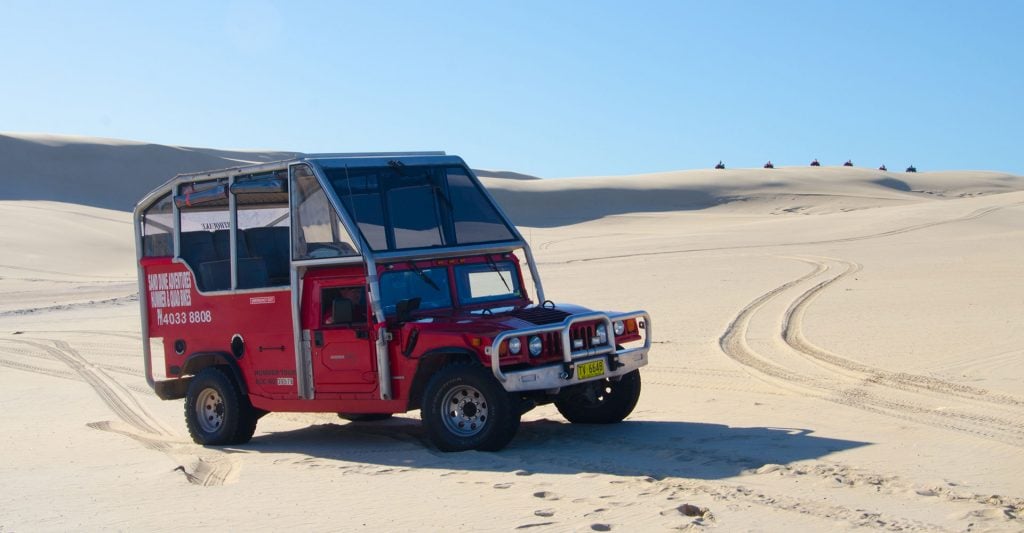 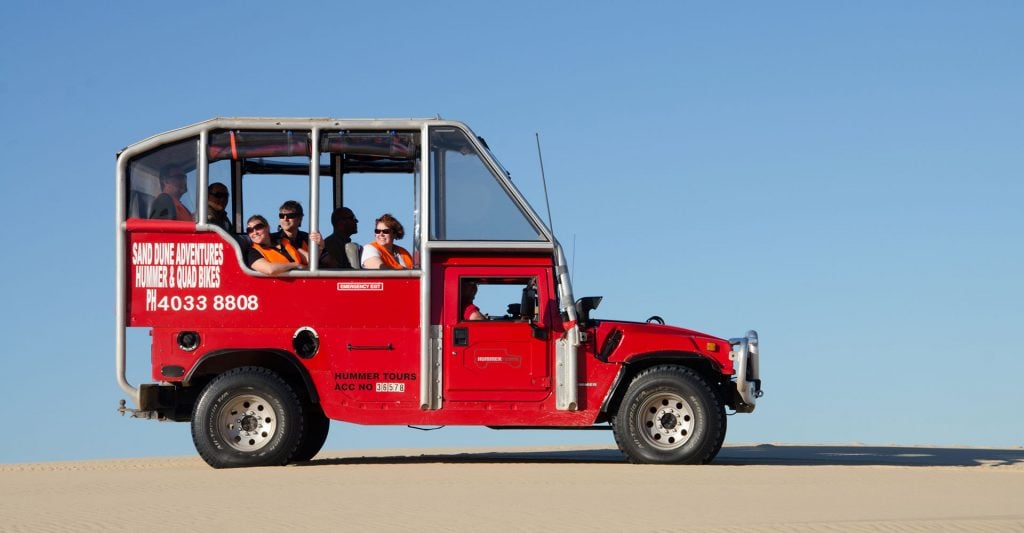 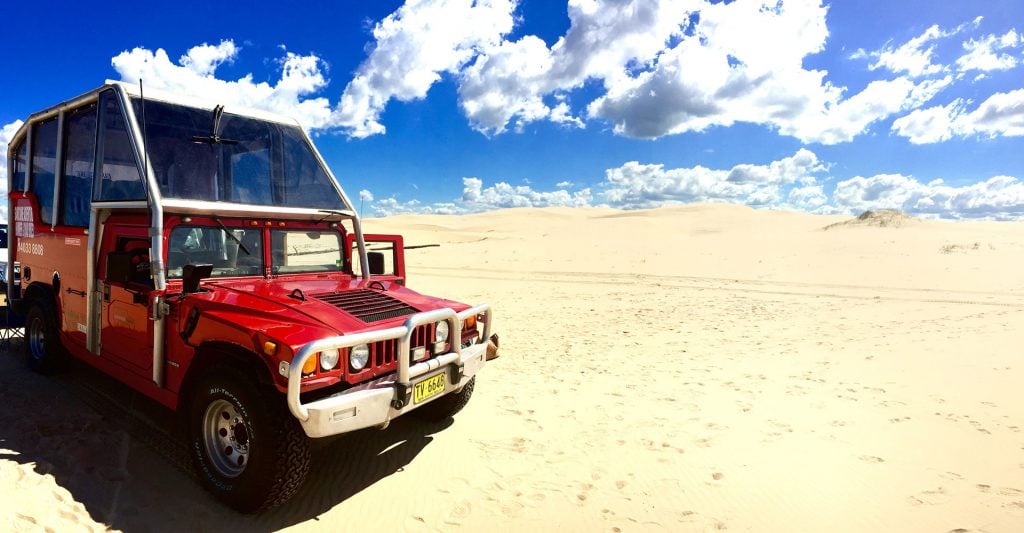 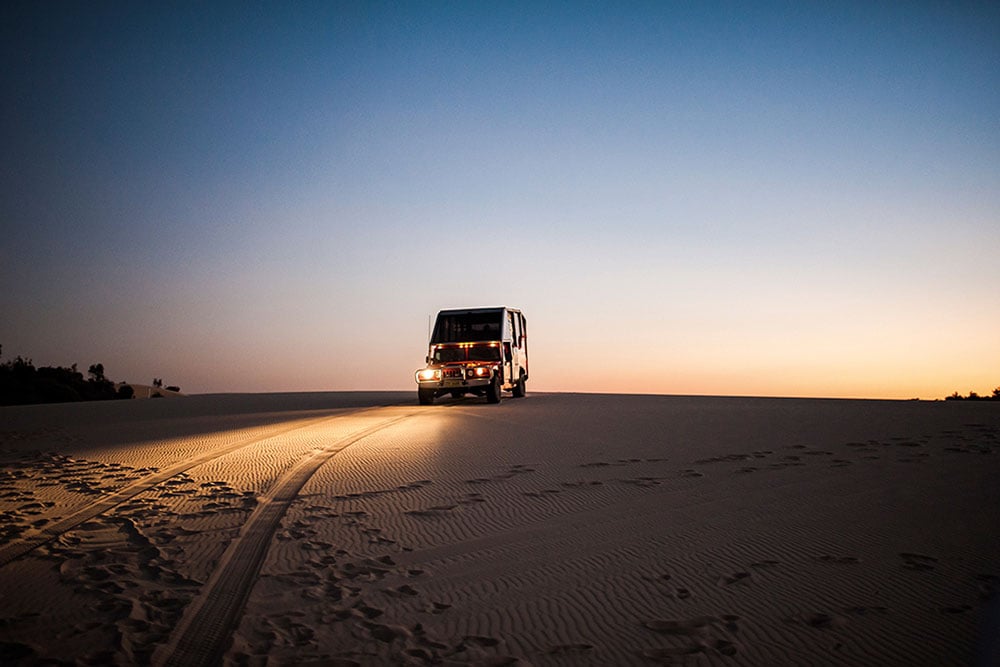 Enjoy an uninterrupted 180°view of the beach and dunes. Our 12 seater H1 Hummer Safari tour of the only one in Australia.

Learn about the Aboriginal and European occupancy of the Dunes. And sand boarding down the highest Coastal Dunes in the Southern Hemisphere.

Depending on the tour time booked we may not get to all that is listed below. Our hummer tours are also affected by the beach tides at certain times of the day.

The earliest inhabitants of the Port Stephens region in particular the land close to Port Stephens were the Worimi Aboriginal tribe.

Their middens may be seen at many points along the beach. These middens, which are up to 12,000 years old, consist mainly of the remnants of pipis and whelk shells. As the beach is constantly reshaped by the winds some middens are concealed while new ones are revealed.

Stockton Beach is an awe inspiring 32 kilometre stretch of beach and sand dunes. The dunes can exceed 30 metres in height.

Stockton Beach is located between Birubi Point at Anna Bay in the north of Port Stephens. The town of Stockton near Newcastle in the south.

This almost surreal dune system is up to 1 kilometre wide in places and covers an area of over 2,500 hectares. It is reputedly the largest ‘moving’ sand dune system in the southern hemisphere.

The Bight is also home to the wreck of The MV Sygna which was a 53,000 tonne Norwegian bulk carrier. It ran aground during a major storm after battling unsuccessfully against winds of up to 185km/hr on 26 May 1974.

Lagoons in the Sand Dunes

A lagoon is a body of shallow sea water or brackish water. It is separated from the sea by some form of barrier.

Brackish water has more salinity then fresh water but not as much as sea water.

In the wetter times rainwater will drain from the higher dunes at the back of the beach. This forms freshwater lagoons in several locations.

Although fresh water is on top of these lagoons, they are usually salty underneath. Fresh water sits on the denser saltwater.

About the Sygna Shipwreck

The Sygna was a 53,000 tonne Norwegian bulk carrier. Now it is a shipwreck on Stockton Beach in Port Stephens.

The ship ran aground during a major storm on 26 May 1974. The wreck has become an icon and landmark for the local area.

During May 1974 the New South Wales coast was battered by large storms. This brought heavy swells off both Sydney and Newcastle ports. Newcastle port reported a swell of over 17 m (56 ft.) at the entrance.

The Sygna was on its maiden voyage, waiting for a load of 50,000 tonnes of coal destined for Europe at the time of the accident. It was anchored 4 kilometres off Newcastle when issued a severe storm warning and directive for ships to move out to sea.

Seven of the ten ships anchored off Newcastle did so, however the Sygna was not one of them. Early the following morning, the captain issued orders to set sail.

Unfortunately, even with its engines at full-ahead the Sygna was unable to make any headway and the storm turned it parallel to the beach.

It is reported that within 30 minutes it had run aground on Stockton Beach. With heavy seas pounding the stricken ship, its captain radioed a mayday and gave the order to abandon ship.

A Iroquois helicopter from RAAF Williamtown’s Search and Rescue (SAR) Squadron attended the scene. They rescued the 31 trapped sailors from the ship in near cyclone conditions.

Fortunately, no one was injured or killed in the incident. The Sygna lost approximately 700 tonnes of oil during the accident.

This oil was mostly dispersed by the heavy seas, and as such no clean up or recovery action was undertaken.

After the storm had subsided the salvage operation commenced. The ship was swung around, which caused the heavier stern section to sink into deeper water. This caused the ship to break its back.

On 4 September a salvage team led by Japanese millionaire Kitoku Yamada. They refloated the ship after repairing several holes in the hull and then pumped out thousands of tonnes of water.

The stern section was refloated first, followed by the bow, which had been resting deep in the sand. The bow remained afloat but unfortunately for the salvagers the stern again went aground about 80m out from the beach and gradually settled in the sand as salvage crews stripped it of all items of value.

In November 1974 another salvage attempt was made of the stern of the Sygna. This caused a very heavy oil pillage, which spread along a 16 kilometres stretch of Stockton Beach. Bulldozers attempted to bury the oil in the sand above the high water mark.

The stern still lies on Stockton beach and has slowly been decaying from the harsh elements in its environment, however, it remains as an icon and landmark for the local area. The Sygna is the last of 59 ships which have been lost on Newcastle shores

Why is Stockton special?

Stockton Beach has been the site of numerous shipwrecks over the past 200 years but especially since the late part of the nineteenth century.

Wreckage from many shipwrecks continues to wash ashore periodically but the most well-known, recognisable and permanent of the wrecks are the Uralla and the Sygna.

In the late 1800s shipwrecks on Stockton Beach were so common that two tin sheds were constructed on a part of the beach to hold provisions for shipwrecked sailors. The Site of these tin sheds is now Tin City.

The Uralla was a 537 tonne, 46.4 m long steamer that ran aground during a gale on 14 June 1928 approximately 9 km down the beach from Anna Bay. There was no loss of life but after the vessel was eventually refloated it drifted ashore and broke up. Its remains may be seen occasionally at low tide.

In August 1808 The Dundee was making its way from Sydney to Fiji. It battled against a gale and was washed onto Stockton Beach. Two lives were lost. 1826 The wreckage of Newcastle (a schooner) was washed ashore after disappearing for almost a month. All nine people on board were never seen again. 1866 The Cawarra was the most tragic shipwreck, with 60 people aboard, within metres of Stockton Beach the sea was so rough that only one passenger managed to stay above the water.

About Middens on the dunes

Aboriginal ties are strong within the Worimi area. The Worimi people have called this area home for thousands of years.

Aboriginal middens can be found throughout the dunes, and occasionally, tools and implements are discovered.

What are Shell Middens?

Shell middens are places where the debris from eating shellfish and other food has accumulated over time.

Shell middens tell us a lot about Aboriginal activities in the past. The types of shells in a midden can show the type of marine environment that was used, and the time of year when Aboriginal people used it.

Where do you find shell middens?

Shell middens are found throughout Australia, usually close to a shellfish source. They are generally found on the coast, but can be around inland lakes, swamps, and river banks.

What is Tin City?

Middens may contain evidence of stone working and stone artefacts. Stone will often have come from a very different area, showing that it was traded or transported.

Scientists occasionally find shell or bone artefacts, such as fish hooks or barbs, in the upper layers of shell middens.

Tin City was built by very poor people before the Second World War as the villagers found they could survive on abundance of Pipis and fish from the sea.

During the Great Depression of the 1930s a group of squatters constructed a series of tin shacks built from corrugated iron sheets, at the site which is approximately 11km south west of Anna Bay.

During World War II the shacks were torn down to make way for an Army camp but were rebuilt after the war was over. Tin City was used during the War as accommodation for the army.

During the war the whole length of Stockton Beach was protected by rows of razor wire and tank traps in order to stop the advancing Japanese tanks and soldiers landing on the beach. Fortunately the Japanese did not invade.

Tin City was then used as an overnight base just prior to the World War when a local and his mates dug up an old tin shed buried in the sand and began using it for their fishing expeditions. At the end of the war, the buildings were given back to the locals.

Today, 11 of the shacks, known collectively as Tin City, remain but no new shacks may be built. Nor can existing shacks be rebuilt if they are destroyed by the elements.

If one of the huts falls down, it cannot be rebuilt and the buildings are of no official value, which means that they cannot be bought or sold.

The only way to get your hands on one of these bits of beachfront real estate is to have it gifted to you.

Tin City was used for several scenes in the 1979 movie Mad Max.

Over many years Stockton Beach has been the site of numerous shipwrecks and aircraft crash sites. In World War II it was fortified against a possible attack by Imperial Japanese forces.

During that time it served as a bombing and gunnery range as well as a dumping area for unused bombs by aircraft returning from training sorties. World War II resulted in fortifications against a possible amphibious assault by Imperial Japanese forces being installed along the beach.

Many of these fortifications are in the form of barbed wire entanglements and concrete pyramid shaped blocks, commonly known as tank traps, may be seen along the beach.

During World War II the beach was used as a military bombing range and Air Force pilots used to regularly drop unused bombs on the beach before landing at RAAF Base Williamtown.

To this day it is occasionally possible to see exposed bombs in the sand. Stockton Beach is less than 3.5 km from theRA AF Base Williamtown and is subjected to many over flights by both RAAF and civilian aircrafts.

On 10 February 1960 a CAC CA-27 Sabre from RAAF Base Williamtown crashed on the beach after overshooting its approach. The pilot was killed. The remains of this aircraft appear from time to time. The traps were put along Stockton Beach to stop the invasion during WW2.

The tank traps, as well as a few areas where barbed wire and star pickets are still visible, were built in 1942 during World War II to deter the anticipated invasion of the Japanese Army. The tank traps on the beach are slowly being covered by sand.